The Massachusetts Department of Public Health has now identified Revere as a HIGH-risk level for West Nile Virus.Learn more

Revere is an ever-changing, growing city; having an accurate and up to date view of the city and its residents gives important insight for the master plan. These are the various statistics and data points relevant to Next Stop Revere, covering demographics, employment, education, housing, and health. Data sources include the U.S. Census, American Community Survey, and MAPC. 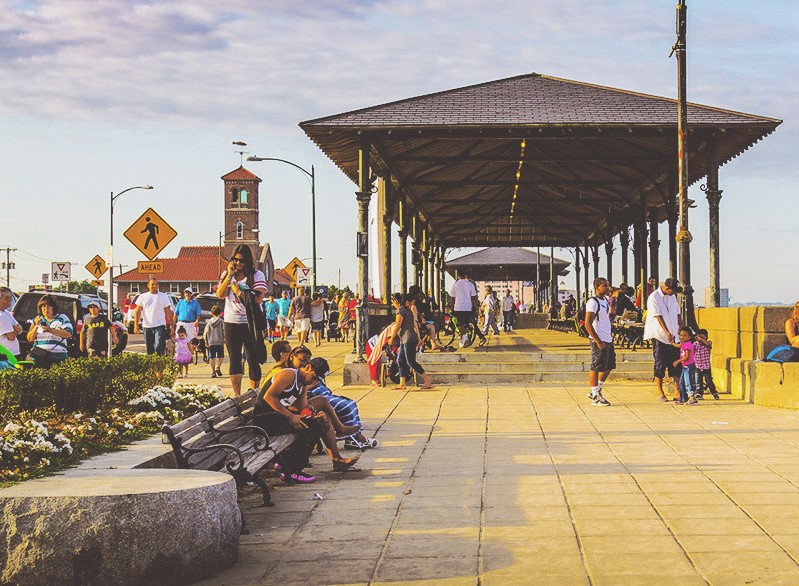 Revere is a growing city. Who lives here? How has our population changed? How can we project future change? A robust understanding of our current community make-up, of who lives and works in Revere, and how Revere is changing over time can provide helpful insights into the development of Next Stop Revere.

Population growth in Revere is consistent with regional and statewide trends. The Greater Boston Area remains a hub for growth.

Revere has a total population of 53,864 people. 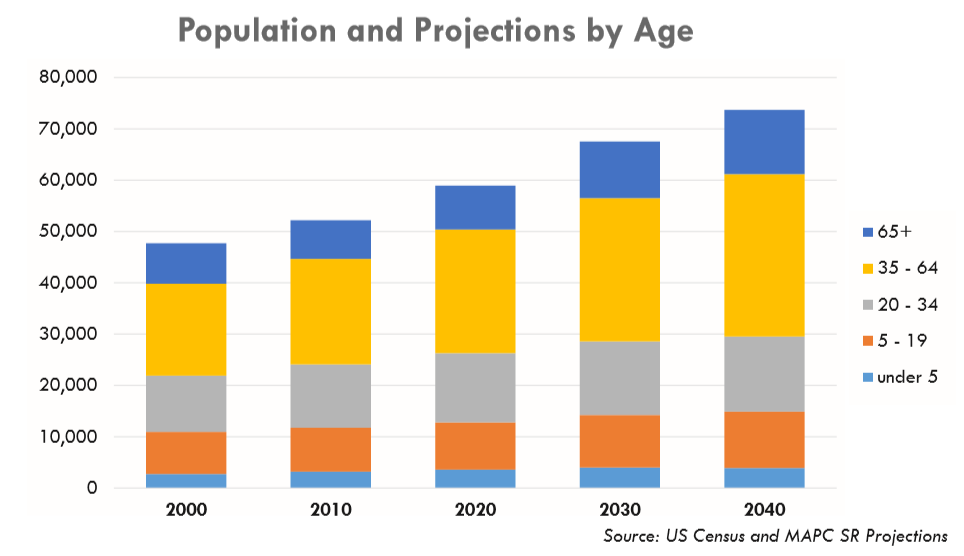 Consistent with its long history as a gateway community, Revere has a remarkably diverse population, even compared to peers in the region. 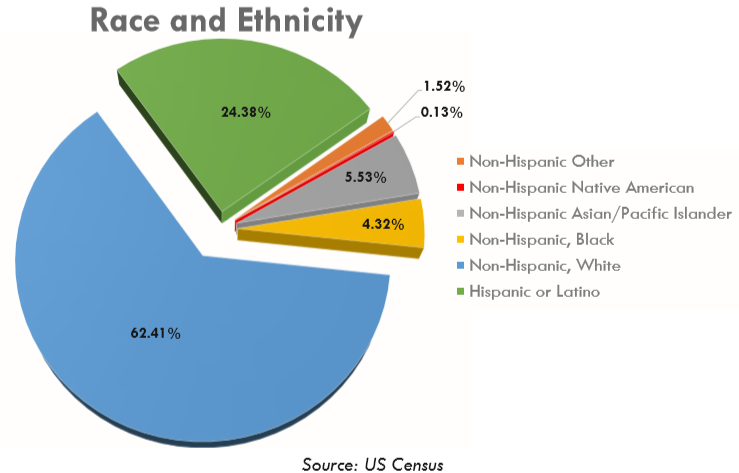 Nearly 20,000 Revere residents are foreign-born, bringing diverse global perspectives from around the world, and most predominantly from Latin America, Northern Africa and Eastern Europe. 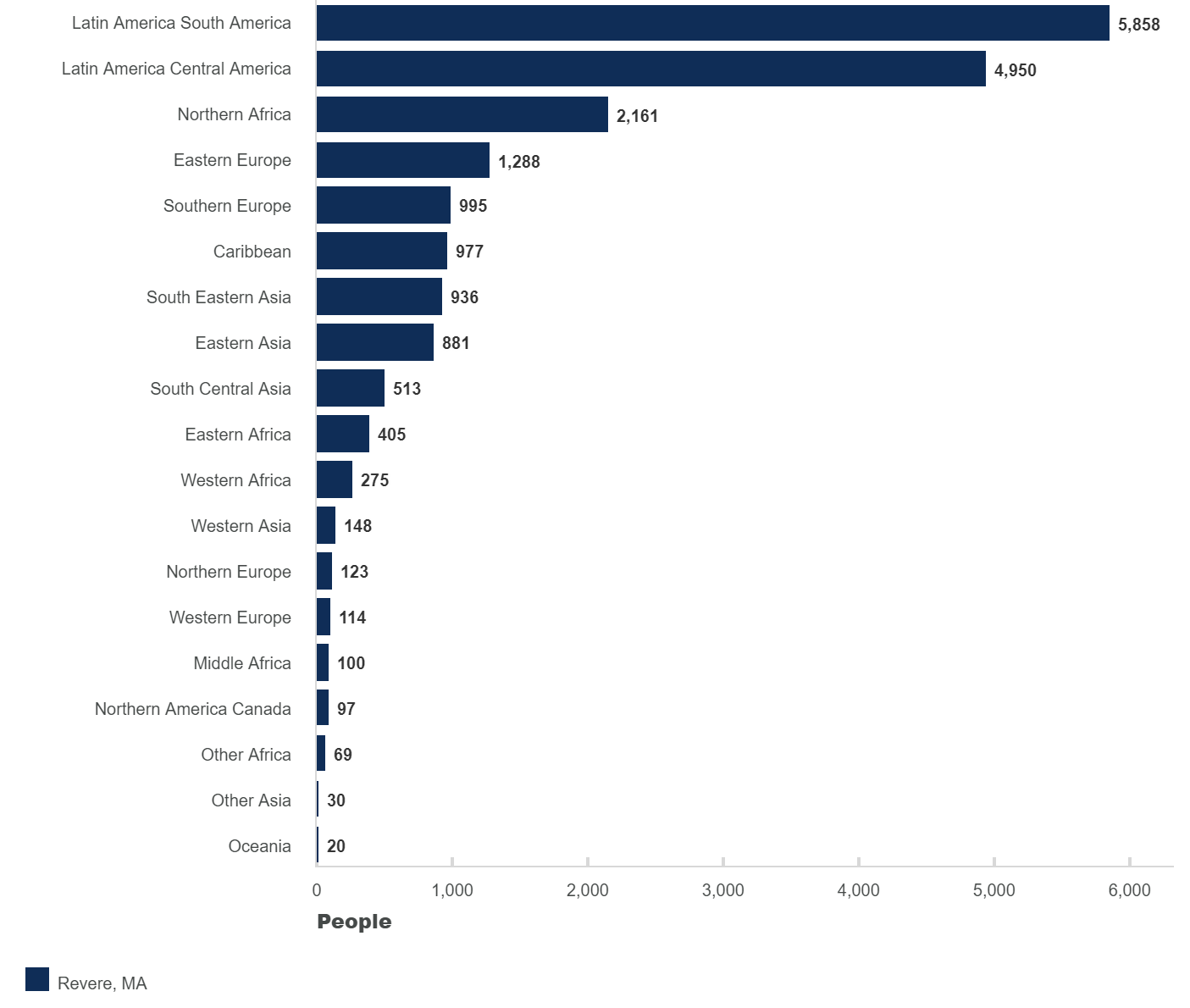 The analysis of Revere's median income gives insights into the population, growth, and capacity for growth. 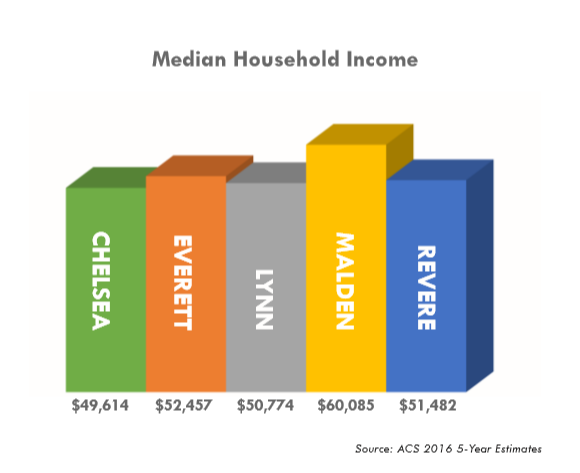 Since 2010, the percentage of Revere families below poverty level has dropped sharply. Causes could include various household, neighborhood, and/or population changes in Revere.

1,147 families, or 9.4% of all Revere families, currently fall below the poverty level 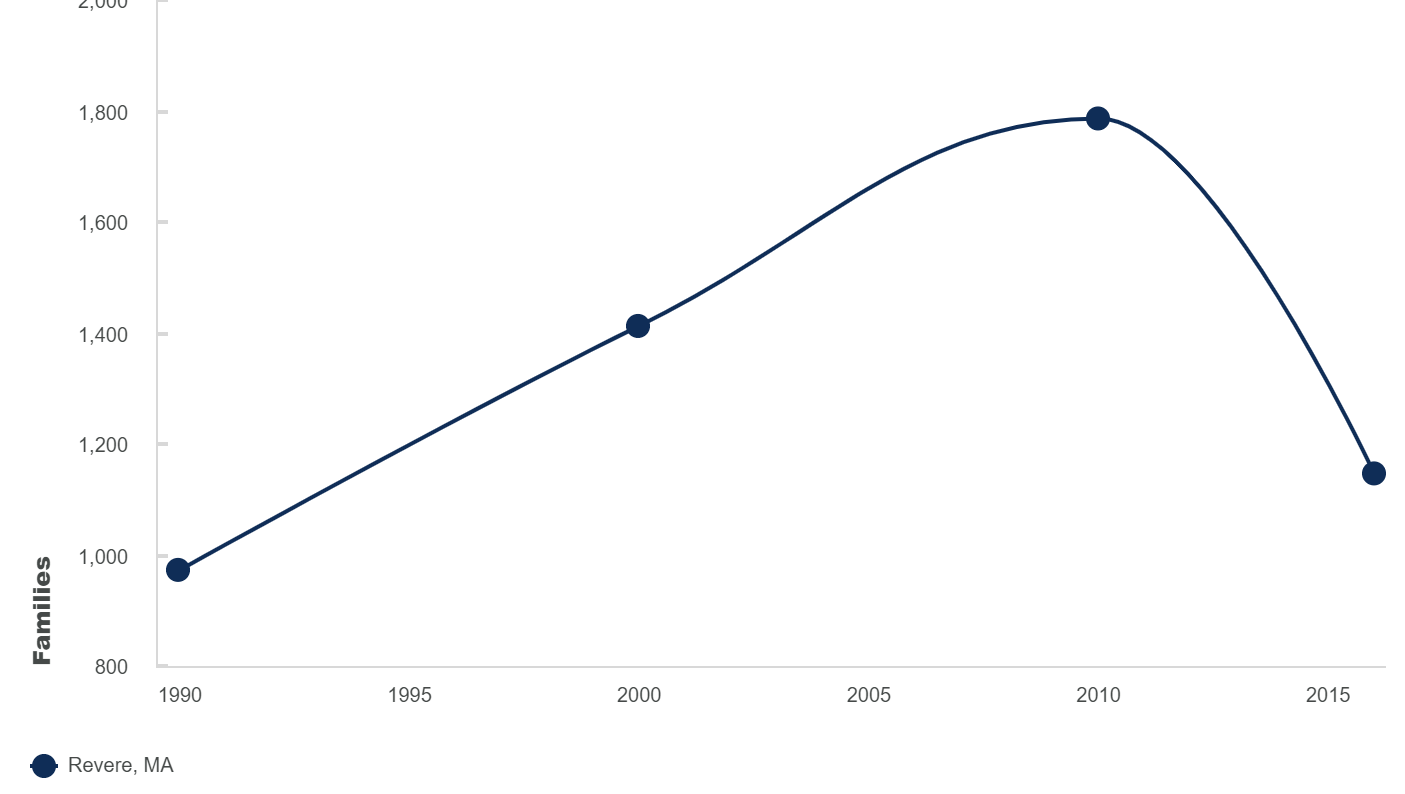 Revere is home to many residents who may benefit greatly from accessibility improvements and accommodations in the city. 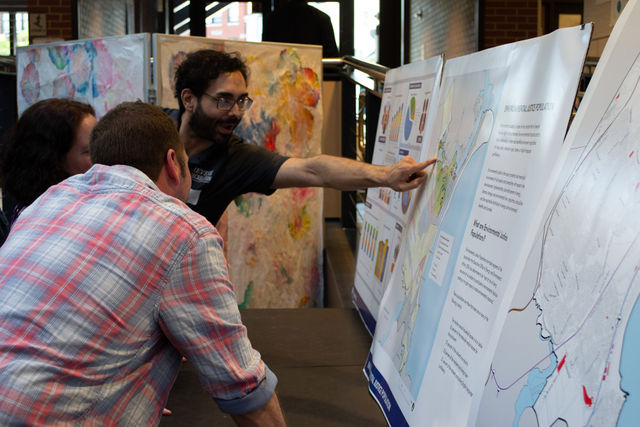 Revere's growth and how it benefits local residents are important themes for Next Stop Revere. Insights into the strengths and needs of Revere's workforce can help inform master plan recommendations that can encourage the creation of good jobs and economic opportunities in Revere and the region.

To plan for the future, it helps to understand where Revere residents work, and what professional skill sets they bring to the local and regional workforce. 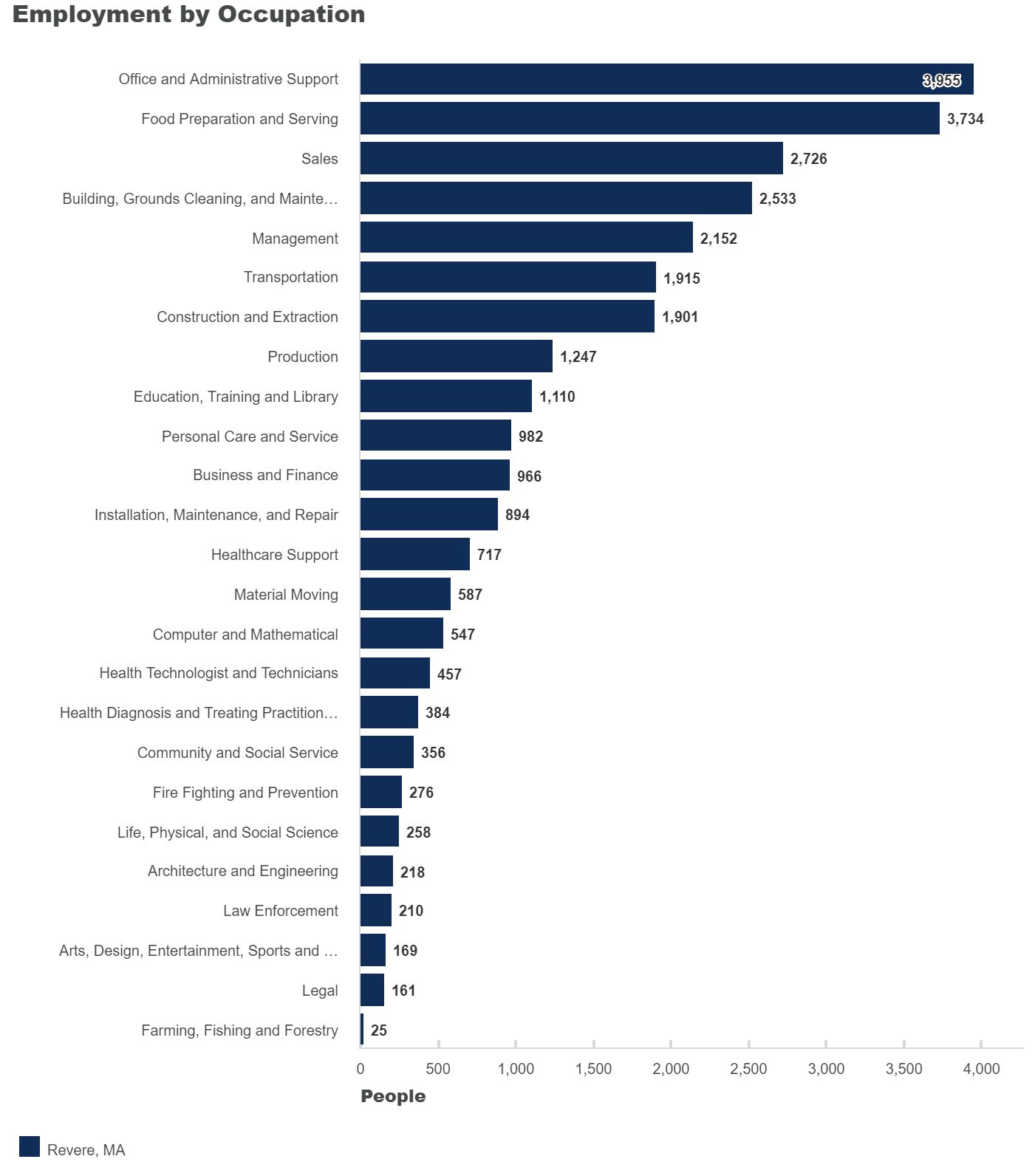 Unemployment in Revere has continued to decline since 2009 and is very consistent with regional trends. 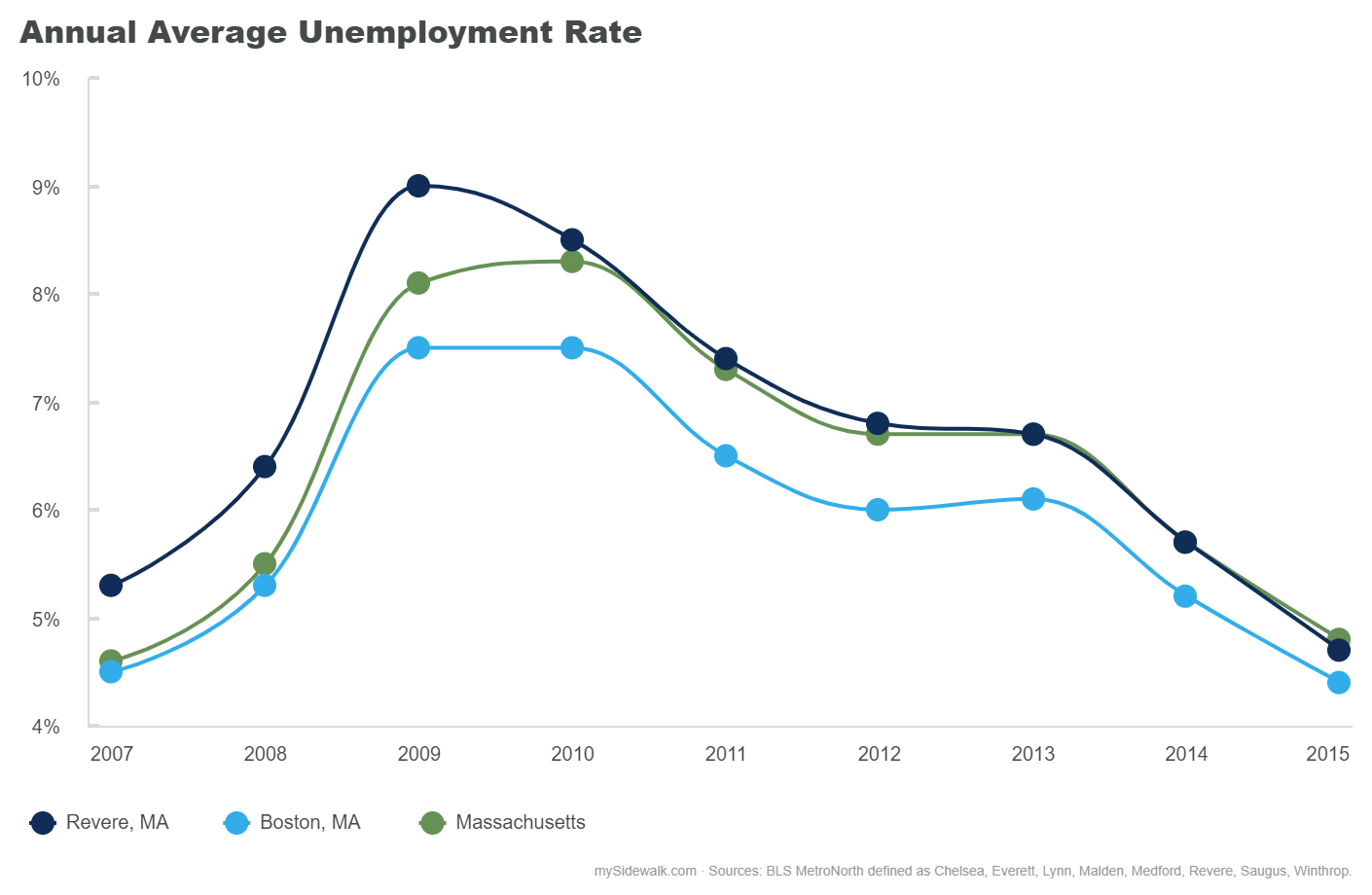 A broad view of residents' educational attainment and aspirations - from daycare to K-12 education to adult job training classes - provides important context for planning for facilities, programs, and partnerships to support a thriving Revere.

Though unemployment rates are low, Revere residents also have relatively lower rates of educational attainment compared to the region. There may be interest among residents for 'upskilling' credentials or improving access to existing educational opportunities in an increasingly competitive job market.

As one of the City's most significant land uses, housing is a priority issue for Next Stop Revere. Information about Revere's existing housing inventory, historic and regional trends, and the characteristics of current and projected future residents all provide helpful context for developing a community's housing goals.

Highest Density Along the Beach

Coastal neighborhoods in Revere, which include some of its oldest and newest residential development, tend to have the highest household density. Public housing and private multi-unit properties may account for other clusters. 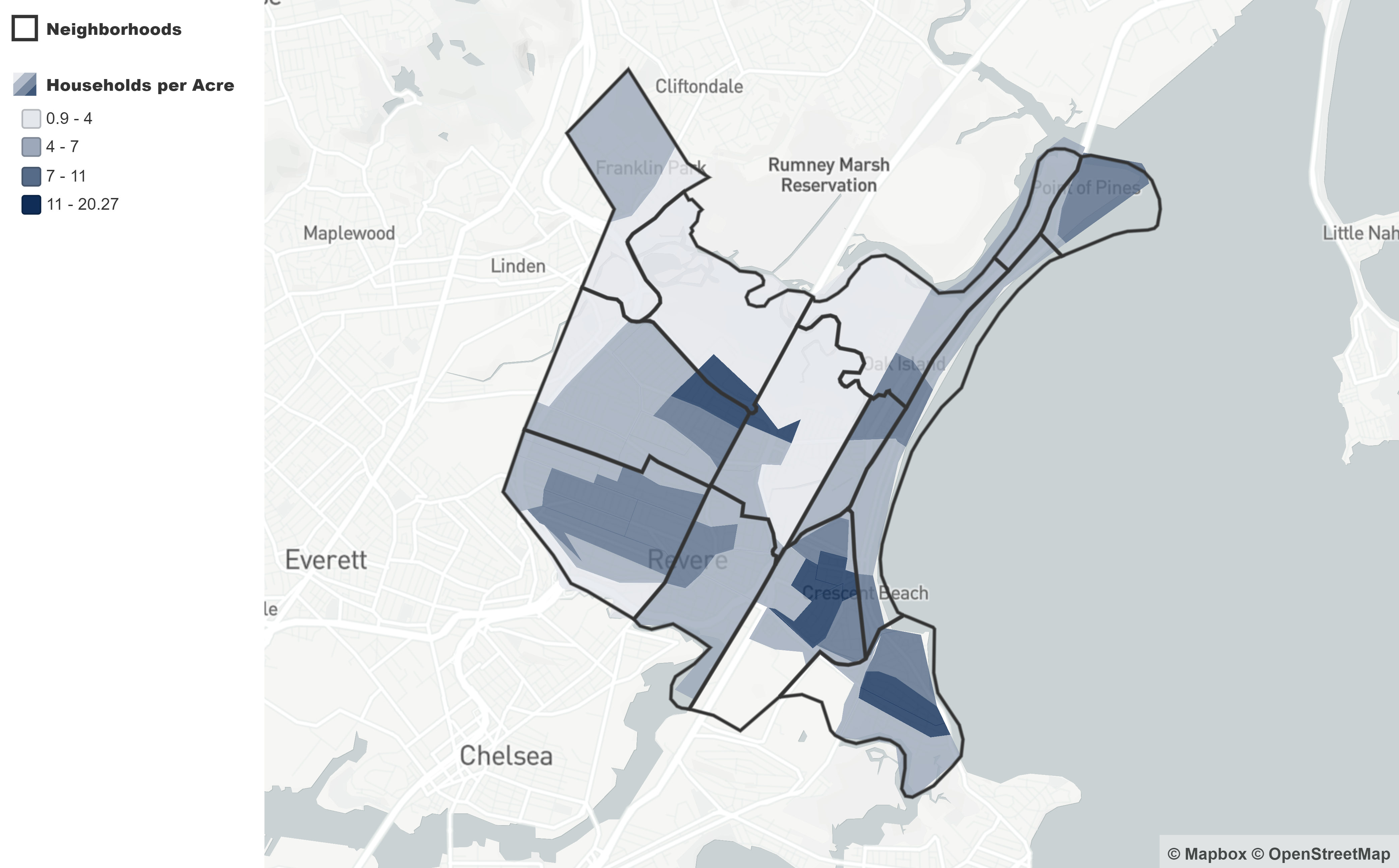 Revere's overall supply of housing units is growing over time, though the nature of development planning and permitting can account for significant spikes or dips over short periods of time. 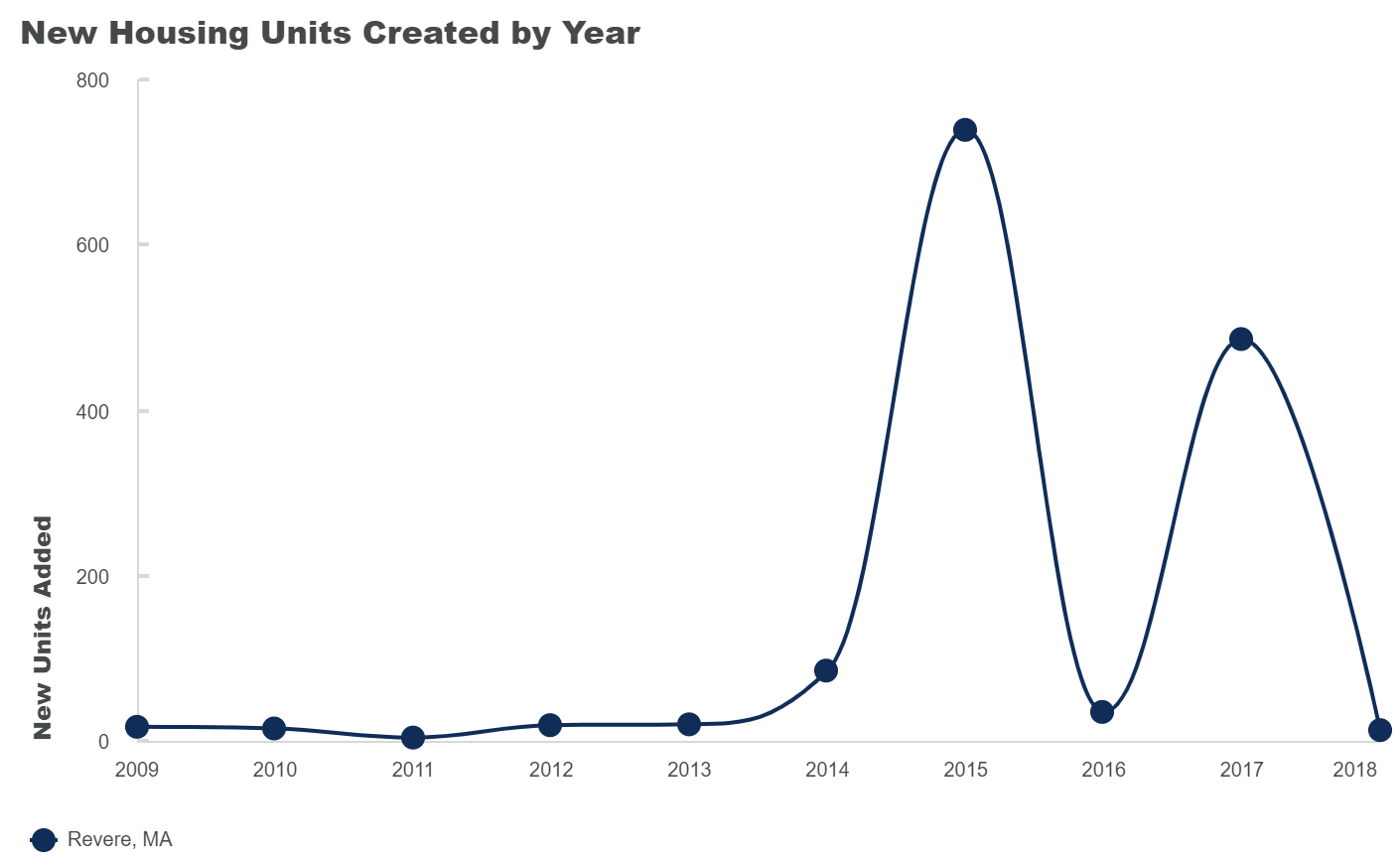 Vacancy Rate Lower than the State's

Housing units in Revere are in high demand, which can be due to a range of factors such as the city's relative affordability, quality of life, access to jobs and transit, and the city's proximity to Boston. Demand is likely to remain high.

A Greater Measure of Housing Affordability

On a citywide basis, Revere provides a comparable or greater measure of housing affordability than its regional peers. For lower income residents, housing costs remain a substantial burden.

On average, housing costs reach to 28.65% of the median income, with low income individuals on average spending 115.65% of their income on housing.

Families with At Risk Housing Remains a Concern

Many of Revere's homeowners and renters contribute a substantial part of their income to housing costs. Spending in excess on housing reduces household resources available for other needs or discretionary spending, which can also impact residents' lifestyle choices and participation in the local economy. 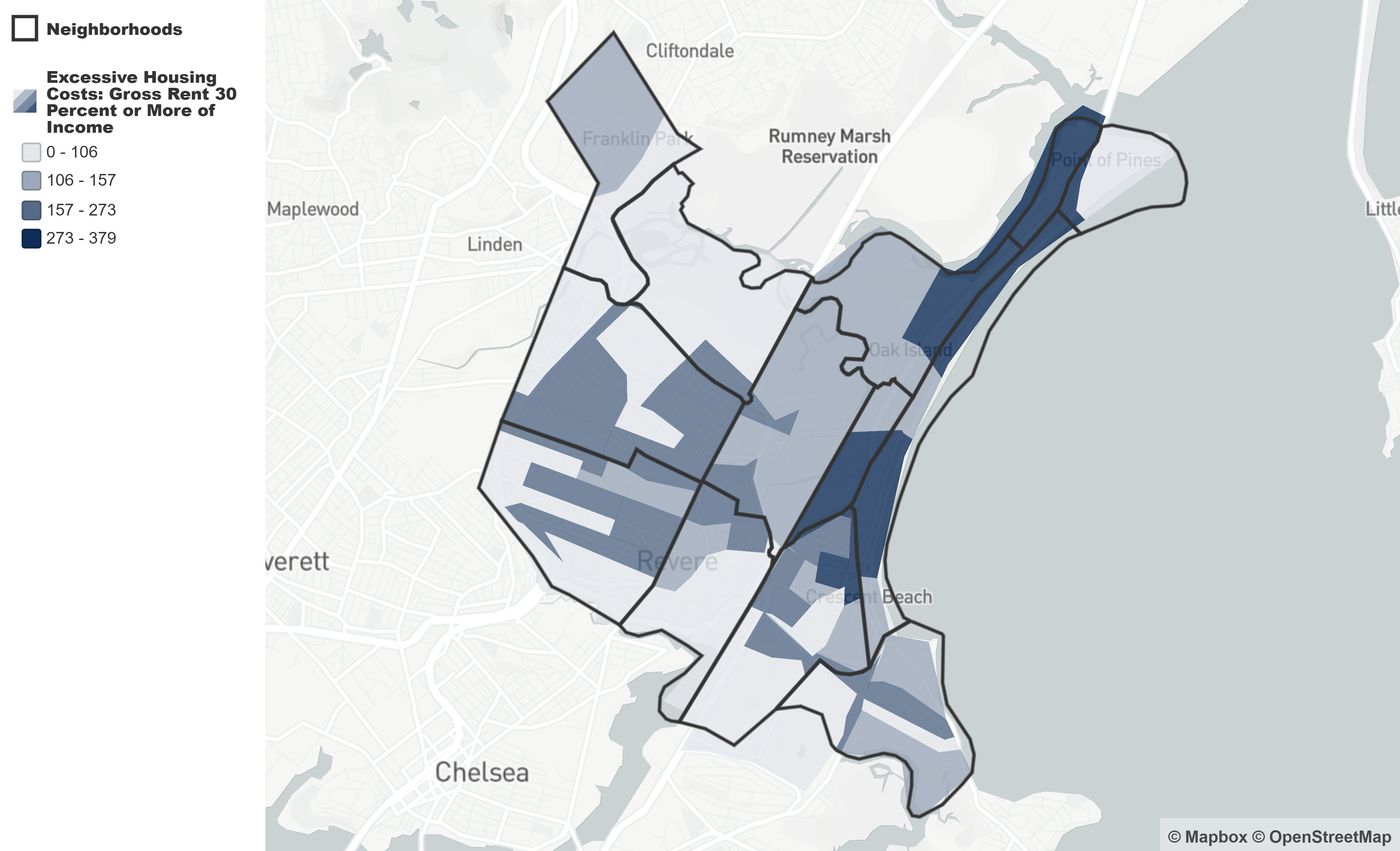 This data set from the U.S. Census is designed to show the number of people per bedroom in units of housing. This can be an expression of family size, of young people staying at home after graduation. It can also potentially symbolize stress on the housing and family units.

There are a total of 1,032 crowded housing situations in Revere. 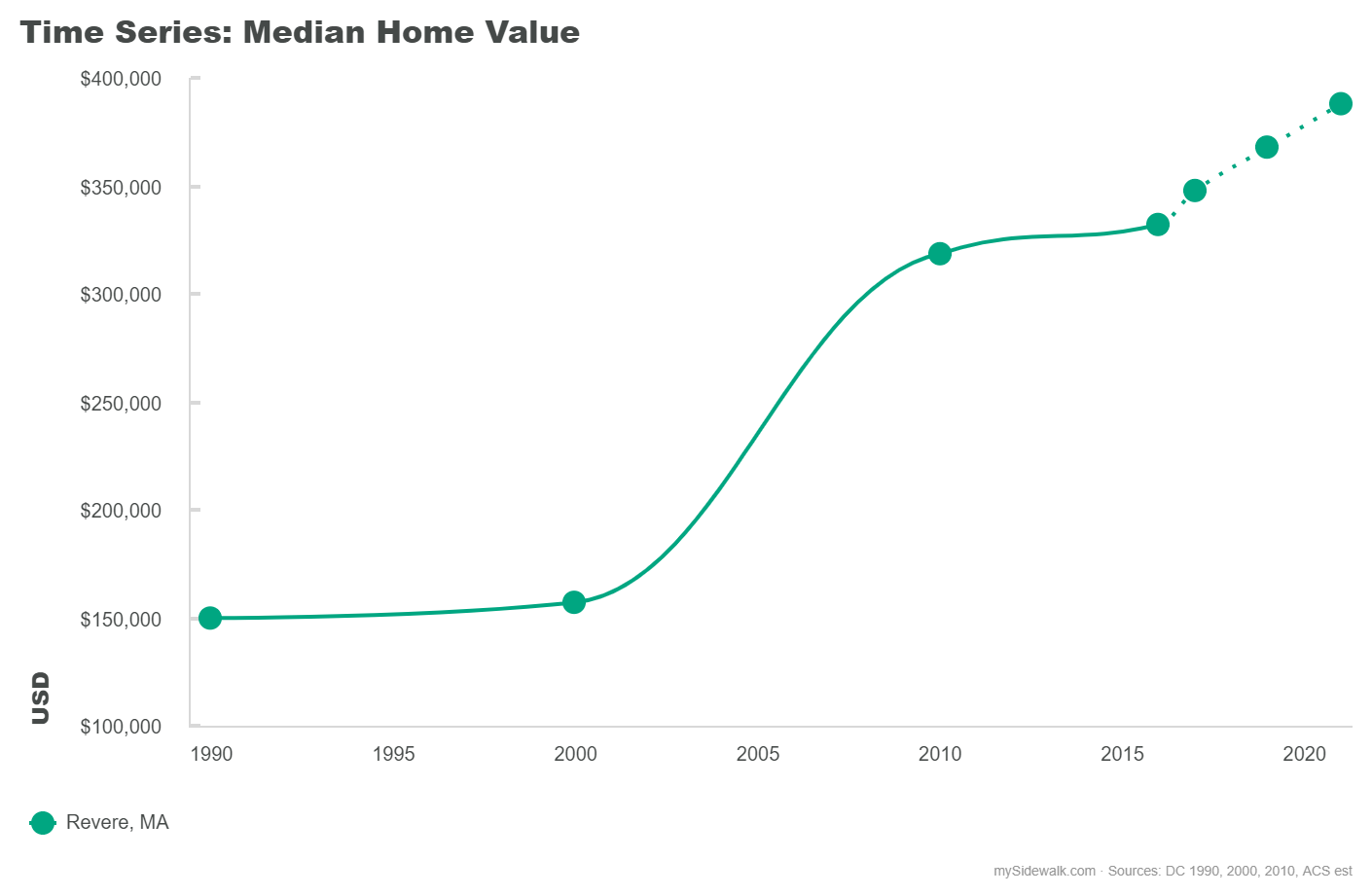 Transportation is a very regional issue, though impacts are felt at a local level. A master plan considers not only these regional networks but also how local roadways, transit systems, and other travel modes currently serve, and can better serve, the needs of users to connect to places within Revere or the region.

The Boston area has been cited as having some of the highest commute times in the country. Despite easy access to public transportation and close proximity to  Boston, the average commute time for Revere residents is actually slightly the regional average of 29 minutes.

Revere's predominant land use is residential, though a few of the city's most prominent vacant parcels, such as the former Wonderland Race Track, are commercial or industrial.

As the community evaluates current and future needs in the city, the master plan will also incorporate discussion and recommendations about how zoning impacts opportunities to bring new jobs and industries to Revere. 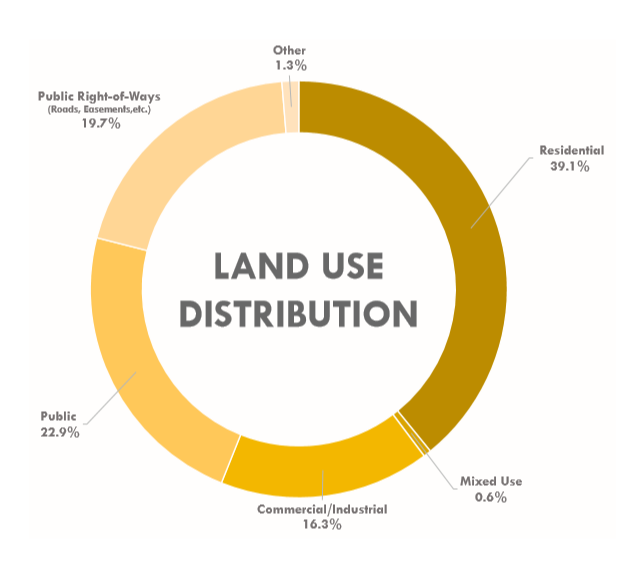 Public health considers many factors that affect resident and community well being, social cohesion, and quality of life. Next Stop Revere will consider how the natural environment, built environment, and social determinants such as healthy behaviors interact and can be improved to support a thriving community.

As we consider the needs for more recreational opportunities and healthy food alternatives for families, understanding the health hazards created by obesity provides important context for these planning strategies.

Data and research show a positive association between the walkability of a city and a number of key factors that improve the quality of life for residents, including reduction in crime, improved creativity, and high social engagement. 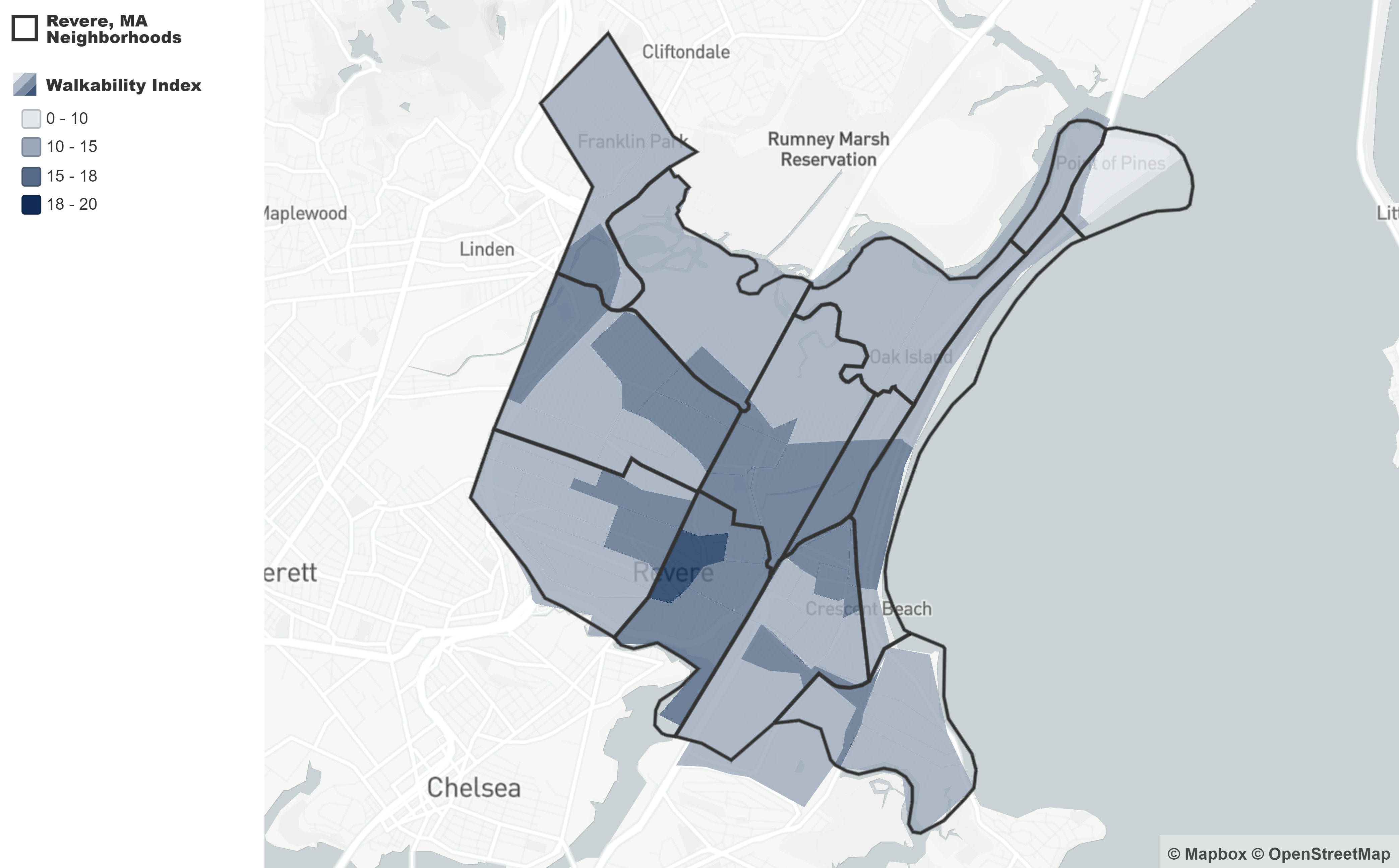 Monitoring Substance Use in Revere

While substance abuse is measured on an individual basis, it has considerable effects on the community at large. Revere is heavily impacted by opioid abuse and relatively more so than surrounding communities, though the epidemic extends far beyond Revere. 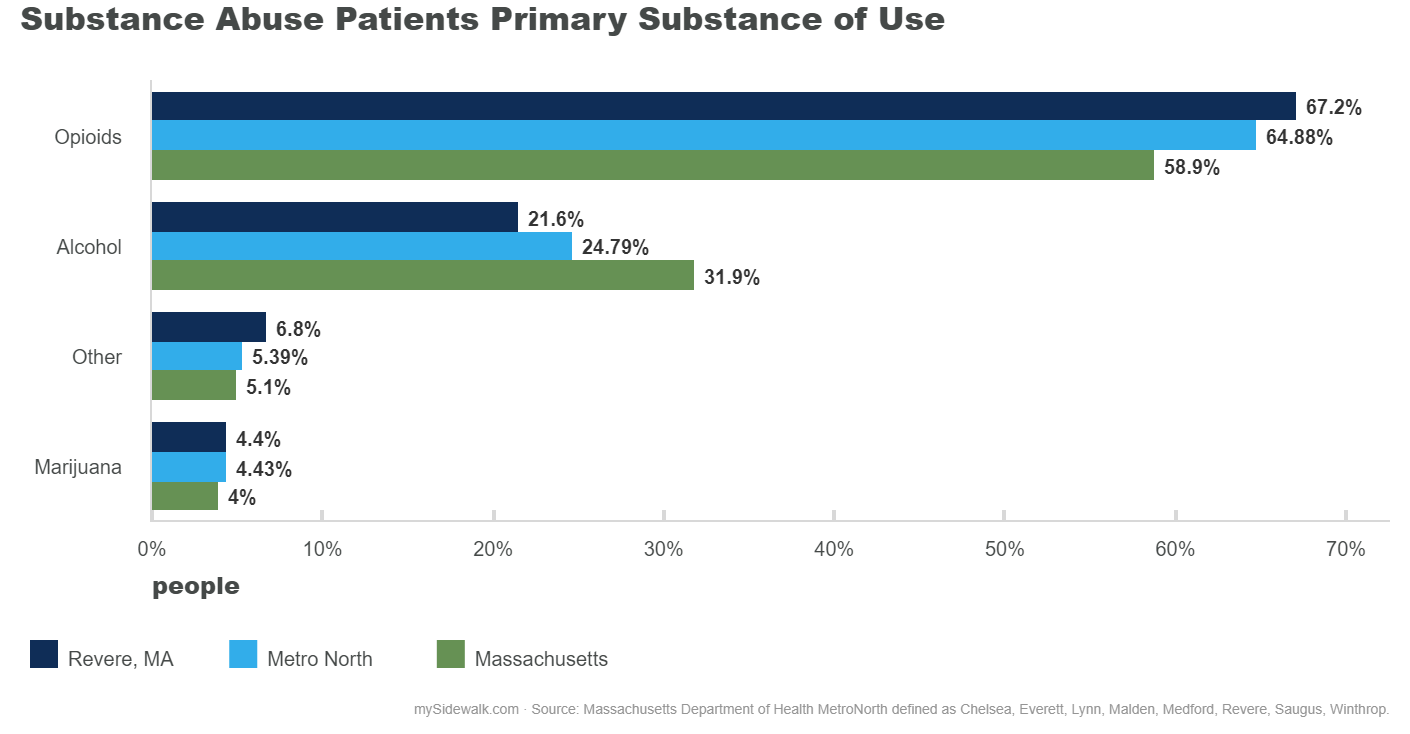