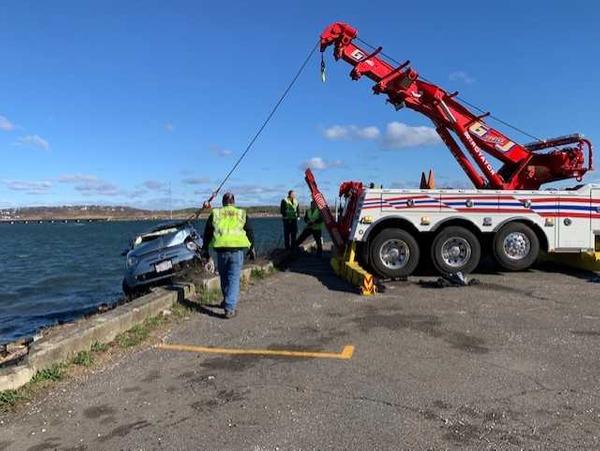 On Tuesday, 4-16-19 at approximately 7:36 am a box alarm was struck for a report of a motor vehicle in the water with entrapment in the vicinity of 655 North Shore Road southbound.  The response included E5, E4, E1 with the inflatable zodiac with dry suits, L1 and the Deputy.  E5 while travelling northbound to the turnaround could see a car in the water and immediately radioed the confirmation to Fire Dispatch alerting all incoming crews.  Upon arrival Lt. Griffin of E5 instructed FF. F.Trichilo to prepare the hoseline floatation equipment while he and FF McInnis made their way to the shoreline.  Civilians at the scene said there was someone still in the vehicle.  The airbag deployment made it difficult to see inside the vehicle which at this point was more than three quarters submerged.  Lt. Griffin realizing the situation could only get worse and time was critical, without hesitation, made the decision to enter the water and attempt a rescue.  They waded out chest deep in 43 degree wind driven chop to find a man struggling to keep his head above the rising water.  It took the efforts of both rescuers to open the driver’s door against the water pressure and current.  Once open, the man, weak, bruised, disoriented and unable to help himself was pulled from the vehicle placed on his back and assisted to shore.  If not for the immediate response and execution by the rescuers the outcome most assuredly would not have been as successful.  The victim a male in his 40’s now conscious and alert with some facial bruising was taken to the Cataldo ambulance warmed and transported to the hospital.  Deputy Todisco the Incident Commander on scene notified G&J Towing for the vehicle recovery.  The DEP, Coast Guard and the Harbor Master were also notified for any environmental issues however, there were no obvious signs of contamination in the water from the vehicle.  The incident concluded at 8:35 am.