Visit www.revere.org/ARPA for program details, required documentation, and the application.

Water system improvements will take place across the city.Learn more 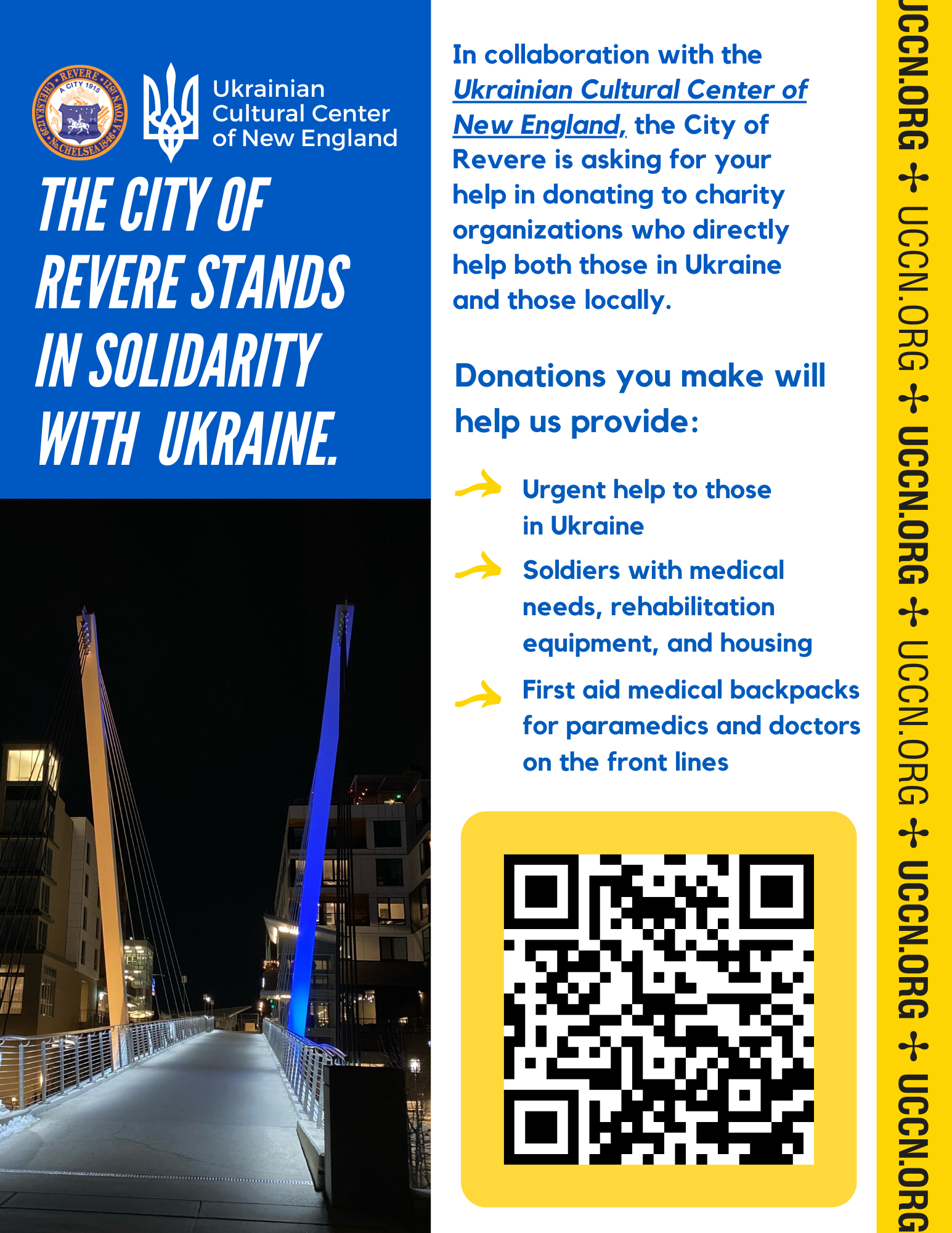 REVERE, MA – Mayor Brian Arrigo and the City of Revere, in partnership with the Revere City Council, illuminated the Markey Bridge this week with the colors of the Ukrainian flag. The illumination will begin at dawn and will run for as long as we need to stand in solidarity to end this war. The Ukrainian flag was also raised at Revere City Hall on March 1 and will remain for the foreseeable future.

“The City of Revere is proud to stand in solidarity with the courageous people of Ukraine,” said Mayor Brian Arrigo. “We hope this cruel and unjust war will come to an immediate end. We send love and prayers to Ukrainians and all loved ones impacted by this dreadful invasion.”

The Mayor’s Office, Revere’s Office of Talent and Culture, and the Human Rights Commission have collaborated closely with the Ukrainian Cultural Center to identify needs of Ukrainians in the City of Revere. The City of Revere is a proud multi-racial and diverse city with many Ukrainians who call Revere home.

The City wants to reassure Ukrainian nationals and those of Ukrainian descent in our city of our ongoing support and solidarity. More information, including resources and donation links, will consistently be shared through all city channels. The City of Revere is determined to update the community on ways residents can seek support and ways in which they can contribute to supporting Ukrainians both locally and abroad.

After meeting with representatives of the Ukrainian Cultural Center of New England, the City urges residents to learn more about the various ways to support Ukraine, as well as resources for those of Ukrainian descent in our city. For individuals who have lost contact with a family member in Ukraine, The American Red Cross is accepting International Reconnecting Families Inquiry Forms. For those wishing to donate to support Ukraine and for those individuals looking to connect with the Ukrainian community in New England, please visit the Ukrainian Cultural Center of New England’s website at www.uccn.org. The website lists many organizations who are actively accepting donations, and there is also an option to contact members of the organization. If residents are in need of help or would like to contribute to these efforts, the City asks that they reach out to the Mayor’s Office.